Despite an eleventh hour panic about dog passports we have all made it to Uganda unscathed. I knew we had a horrifically early start on Tuesday so we decided to go to bed at 7pm! The idea was to get as much rest as possible as I knew sleeping would be difficult. Just before we turned in I did a final check through of paperwork. S**T! Where was the dog’s passport. I turned my hand luggage upside down. Couldn’t find it! I knew i’d had it at work earlier that day as i’d been copying all the relevant pages for customs…could it still be lying in the scanner…. with fingers crossed, hyperventilating and without shoes; Alex’s Mum drove us up to work where thank God the passport was there.  Full of adrenaline sleep was now even more unlikely!

At 1 am we were up promptly and off to Heathrow. Unfortunately slightly misinformed by KLM we had to hang around at the airport for an extra hour as nothing opened until 4.30am. It left us with only 2 hours to get the dog checked in and on the flight as well as ourselves.  It also increased our nerves even more. With all the usual red tape of British bureaucracy there was lots of hanging around and tooing and froing as we checked Madge in. My favourite  moment was, when with time not on our side and still at check in we had to wait for a florescent yellow jacket to arrive and another KLM agent to assist with steering the dog (by now in her cage and perched on the end of a much too small trolley) through the special security sections for staff (and apparently livestock). We offered to do it ourselves but health and safety, and computer said No. After a quick swipe through of her kennel for drugs and an xray of her bedding Madge was locked away and sent through some secret double doors somewhere into the abyss of Heathrow terminal 4. We had to hope she would be ok on the flights.

With conformation that the hound had infact boarded the flight by the friendly KLM staff (‘Yes Madame, we can see she has just now boarded the flight’ – How!? How can you see this from your computer!?) we got on ourselves and on our way. No one (except my Mum – actually a very reliable source) had told us that Amsterdam Schiphol was so huge. Our transfer time between flights was only 55 minutes and it took us 30 to get from our arrival gate to our next departure gate. We walked so fast and my hand luggage was so heavy! We were worried about how long it would take Madge to get there. We arrived first. I headed straight for the super friendly KLM team who reassured me that they WOULD hold the plane for her should she turn up late… Likely story. They were just trying to keep me quiet and get me to board the plane i’m sure. We waited for the news. Alex eagerly headed for the window to see if he could spy her. There she was. Ears pointy, looking confused. Being raised on a crane into the hold of our giant plane. Horray. Reassured we boarded the plane.

The journey was quite turbulent at times. Poor hound. But on arrival there she was. The handlers had left her in the middle of baggage reclaim, just there, alone surrounded by people and suitcases; so I let her out there and then. She was NOT impressed. But she was ok. Turns out any fears about the dog being allowed into Uganda were unfounded. I showed the customs guards the paperwork. They didn’t ask for it. They were not the slightest bit interested. Didn’t care it was copies and that the originals were in my bag. In fact I don’t think they even read it. I literally walked through ‘nothing to declare’ with Madge trotting next to me; her lead in one hand and the other pushing the giant dog cage along very haphazardly.

Since we’ve arrived most people have asked after the dog first. And then us. That’s fine. We know how much everyone loves Madge. So I thought it was fitting to dedicate this blog post to her. She is fine. And so are we if anyone is interested! 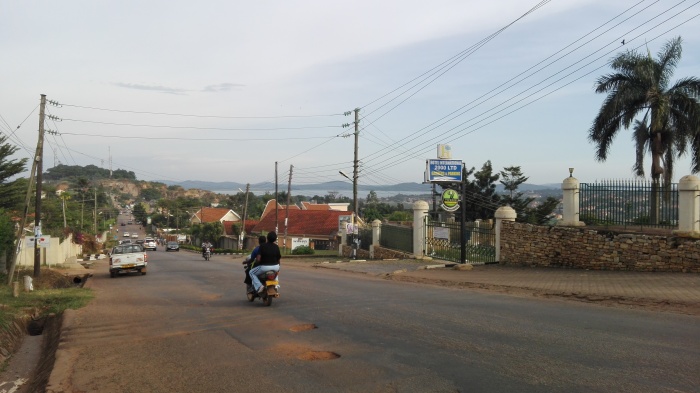